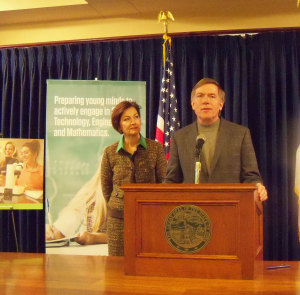 The state announced a new award today for teachers who inspire students in the Science, Technology, Engineering and Mathematics or STEM fields. Lieutenant Governor Kim Reynolds announced the award at the governor’s weekly meeting with the media.

Kemin Industries in Des Moines is sponsoring the award, and Kemin CEO, Chris Nelson, says the idea came after talking with the brains behind the company’s products.

“We did a survey of the over 100 scientists at Kemin and asked the question ‘Where did you get your inspiration to start in science? Was it your parents was it perhaps some other source that really got you started in science?’,” Nelson says. “And when we did this, we found the vast majority of our scientists got their inspiration from a teacher.”

Nelson says they then decided to do something to recognize the impact of teachers. “Kemin industries, like many of the companies in Iowa, continues to search for more scientists and more technically trained people for all sorts of positions in our company,” according to Nelson. “We wanted to take an opportunity to recognize those outstanding science teachers. Because not only are they being able to convey the knowledge of that particular class for that particular year — but they are in fact, changing the lives of their students, inspiring career decisions.” 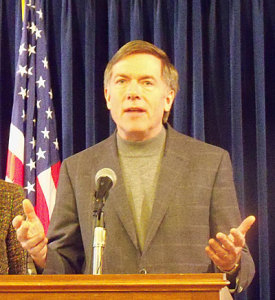 Kemin is putting up money for a “STEM Education Award for Inspired Teaching” that will honor one K-12 teacher in each of the six STEM regions across the state. “There will be one-thousand-500 dollars that will be going to the school, and then one-thousand-500 dollars to the teacher. And so, the split of the award is really to recognize both the school environment that they are in and the need for more equipment etcetera, and to recognize the teacher for what they’ve been able to contribute.”

Lieutenant Governor Kim Reynolds has led the STEM effort for the administration, and says she had some teachers who inspired her. “I did, probably my kindergarten teacher and then I had a 7th grade biology teacher. I wish I would have had the opportunity to participate more hands on though, I am really seeing that have an impact on young people as I travel across the state to school districts,” Reynolds says. “The ability for them to hands on, to apply, to communicate to work together. I hear a lot of young girls say ‘I never thought I would have anything to do with engineering and first tech challenge’, but once they get into it, they love it, they enjoy it.” Reynolds was asked how she did in the biology class and replied, “I passed,” which drew laughs.

Reynolds says the award will help continue the effort to get students interested in STEM by rewarding teachers who inspire them. “We’ve tried very hard to raise awareness of the importance of science, technology, engineering and math and the impact that that has on our young people and the future, and especially our economy right here in Iowa. We want to continue to drive ingenuity and innovation, and science, technology, engineering and math is all a big part of that,” according to Reynolds.

Nelson says the STEM efforts right now are investments in the future, as it will take some time to see the results of the effort. “Minimum of six years — probably it’s going to be a 10 to 15-year effort,” Nelson says. “Really it’s about having the staying power to be able to look to the future to be able to realize these are the seeds you have to plant to be able to harvest six to 10 years away.”

Nominations for the awards are due December 12 and can be completed online. Anyone is eligible to nominate a teacher. Once nominated, teachers will fill out an application to be assessed by a panel of judges who will select the six winners. Winners will be announced in March 2015.

For more information or to nominate an educator go to: stemaward.fluidreview.com