You are here: Home / Human Interest / Senator: veterans gave service and sacrifice for a cause that is timeless

Veterans were honored in ceremonies across the state today including the state ceremony in Des Moines. 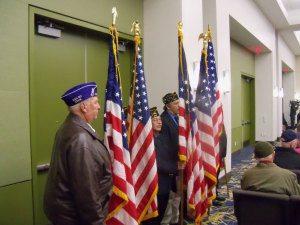 Patriotic music greeted veterans young and old and current members of the military. Iowa Senator Chuck Grassley gave the keynote address, and says soldiers who fight for other countries often do so for different reasons than the U.S. military.

“Soldiers who return from the battlefield for those other countries, albeit victorious, probably battled for some sort of territorial gain. And that battle would win those veterans maybe short-term praise, but in the long run, those people fighting those battles for causes other than liberty and freedom, their causes become nothing but a historical footnote,” Grassley says.

Grassley says Americans who put their lives on the line in defense of freedom can be assured that their services and sacrifices were for a cause that is timeless. He talked about the importance of recognizing the sacrifice. “You veterans and people serving today, deserve our eternal gratitude. And that’s what this Veteran’s Day every year is all about,” according to Grassley. 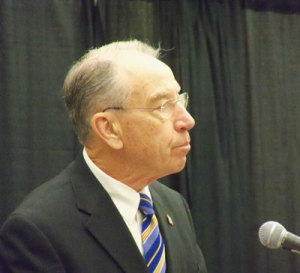 Grassley says it is important to remember that government derives its power from the consent of the people and its primary purpose is to secure our rights. And one of the main ways the government secures those rights is by maintaining a military.

“National security as you know, is the number one responsibility of the federal government under the Constitution. I always say, and I’m sure you folks agree — even those of you in the military — that war should be a last resort. But once you make a commitment and a decision to go to war, we must give the troops everything they need to get the job done and to win,” Grassley says.

Grassley talked about the controversy in the Veterans Administration and problems with helping veterans. “Congress recently passed legislation intended to address the problems with waiting lists at VA hospitals, but that can’t be the end of the story and it’s not,” Grassley says. “Taking care of those who were wounded in service to our country is the least we can do.” 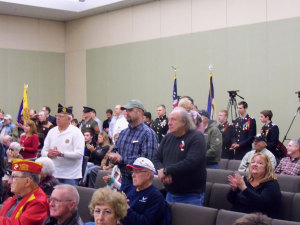 Veterans stand to be recognized as the band plays their branch’s song.

Grassley pledged to continue the effort to reform the system and to continue to take care of veterans once they return home from service “Work must continue both inside the VA and in Congress to improve the healthcare being provided to our veterans — and most importantly to those who are wounded warriors. There’s never a point where we can rest and say ‘good enough’,” Grassley says.

Senator Grassley ended his remarks with another thank you.

“Lastly, and not too often, thank you to all the veterans, thank you to those serving today, and we do surely say, God Bless our veterans and God Bless America,” Grassley says. The event ended with a swearing in ceremony for a couple of dozen of new members of the military.