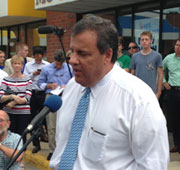 New Jersey Governor Chris Christie is deciding whether to sign or veto legislation to ban hog farmers in that state from using gestation crates, a decision that could impact his future political plans should he campaign in Iowa. Bill Tentinger, a Plymouth County pork producer and a past president of the Iowa Pork Producers Association, says he talked with Christie about the subject at a recent event in northwest Iowa.

“We visited with him and thanked him for vetoing it in the past and supporting us and asked him what his intentions were in the future,” Tentinger says. “He was very adamant, very open and said that he absolutely would veto it. He realizes New Jersey is not the place to be debating this.” While New Jersey’s hog industry is relatively small, Iowa is the nation’s number-one hog producer, in addition to being home to the first-in-the-nation presidential caucuses.

Tentinger says Christie is aware that banning the crates has been the focus of animal rights groups like the Humane Society of the United States. “He knows that it’s HSUS groups that are trying to use his state as a stepping stone to get into larger states or even into some federal legislation,” Tentinger says. “He said that is wrong and he’s said he’s not going to change his attitude about that.” Tentinger says Christie has consulted with Iowa Governor Terry Branstad on the issue.

The bill to ban the crates has bipartisan support in Christie’s state. “The legislature in New Jersey could override this veto and the pressure is rising there,” Tentinger says. “We still have a lot of presence out there, we’re making a lot of contacts, just trying to assure ourselves this will come out in our favor.” Tentinger met with Christie during an October pheasant hunt which served as a fundraiser for Iowa Congressman Steve King at a hunting preserve near Akron. Christie, a Republican, has not publicly declared if he’ll run for president in 2016.