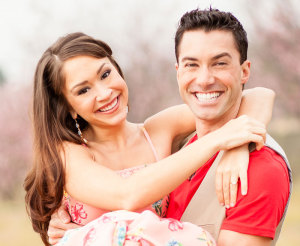 Two former “American Idol” stars who are now married will perform together on an Iowa stage this week in the dual lead roles of the touring Broadway production of “Joseph and the Amazing Technicolor Dreamcoat.”

Diana DeGarmo and Ace Young both saw their careers launched with the nationally-broadcast singing competition on Fox, but Young corrects, they didn’t meet backstage at “American Idol.”

“Diana was on Season 3, she was 16, and I was on in Season 5,” Young says. “We actually met years later when she was 22. We were both individually cast in the revival of ‘Hair’ on Broadway. I was cast as Berger and she was cast as Sheila.”

Young is a 33-year-old Colorado native who plays the title role in the retelling of the Biblical story of Joseph, his eleven brothers and the coat of many colors.

“‘Joseph’ is the perfect show for everyone from the great-grandparents to the great-grandchildren and everybody in between,” Young says. “It’s a quick show, two hours with the intermission included. There’s no talking, it’s literally all music from beginning to end. You feel like you’re shot out of a cannon from the very beginning.”

DeGarmo is a 27-year-old from Alabama who’s also acted on “The Young and the Restless” in addition to her singing — she’s released a full album and two E-Ps. 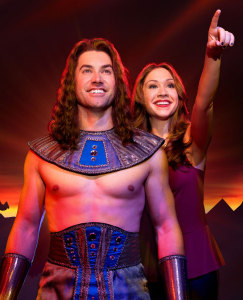 Diana and Ace in costume.

The first incarnation of “Joseph” was put on stage in 1968, making it older than either of the stars. DeGarmo, who narrates the Joseph story in song, says this “fresh” touring production has been brought up-to-date for the modern audience.

“We actually got Andrew Lloyd Webber’s blessing to revise and renew some things and give it a completely new spin,” DeGarmo says. “We’re very lucky we were given the chance with technology to bring a very cool multimedia aspect to the show. When Joseph (Ace) is talking about his dreams, you’re not trying to imagine it, you actually get to see them on the stage.”

DeGarmo and Young got married in June of 2013 in Los Angeles and they’ve been on tour with “Joseph” since this March. Since the two were working in theatre on Broadway when they met in 2009, DeGarmo says this continued working relationship seems “normal.”

“We actually get to spend time being creative together,” DeGarmo says. “We inspire and push each other in the best way possible and we get to share that on stage. It’s funny. Sometimes it’s like, ‘Hey, when you’re standing on that number, can you scoot over a little bit?’ We can get away with a little more as husband and wife in the actor realm than we could if we were not. It’s everyday life for us and it’s fun. We have a great time.”

The musical is at the Des Moines Civic Center from Tuesday through Sunday. Learn more at: www.DesMoinesPerformingArts.org.