You are here: Home / News / DNR says ice not yet safe for fishing 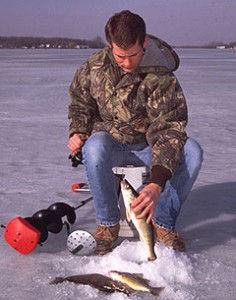 The DNR says the ice on state rivers and lakes isn’t thick enough to fish on. (file photo)

Colder temperatures have caused ice to form on Iowa’s lakes and rivers, but a fisheries biologist with the DNR says it’s not yet time to start thinking about ice fishing. Scott Grummer works in the Clear Lake area.

“The ice fishing will be starting soon, but on this early ice you want to use a lot of caution and do a lot of checking when you enter onto an ice sheet whether it’s a lake or pond,” Grummer says. “We always recommend drilling test holes and if you see any slushy looking or discolored areas, walk around or avoid those spots.”

Grummer says their recommendation is that there be a minimum of four solid inches of ice for fishing and foot traffic and at least five inches of ice for ATVs and snowmobiles. He says the tests on Clear Lake don’t show ice meeting those requirements. He says they took ice depths this morning, with about 2 inches on the main part of the lake with about 4 inches in the Ventura area of the lake.

He says while the cold temperatures the last few days have helped, any moderating temperatures or rainfall can weaken that ice as well. Grummer says you have to be careful when heading out on the ice at any time of the year. “Ice is a changing environment out there, it’s never safe, you always want to use a lot of common sense and caution,” according to Grummer. “You can have a lot of fun on winter ice but you want to have respect for that ice as well.”

Clear Lake is officially declared as “iced in” when no open water is observed along the shoreline. The earliest iced-in date was November 4th in 1991, the latest was December 24th in 2001, while last year the lake was iced-in on November 25th.