You are here: Home / News / Freezing rain to hit parts of state before warm up 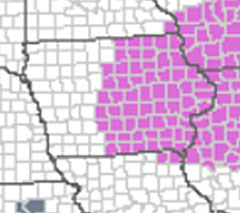 Areas in purple are under a freezing rain advisory.

A freezing rain advisory is posted for nearly all of central and eastern Iowa tonight into tomorrow. Craig Cogill is a meteorologist with the National Weather Service.

“Primarily, along and east of Interstate 35 is the best threat for seeing this freezing precipitation overnight. There’s much less of a threat as you head further west across the state,” Cogill said.

Warmer air is expected to move back into Iowa tomorrow morning, which should melt any potential ice formed overnight. A record cold snap ended today in Iowa’s capital city. “We saw 10 consecutive days where high temperatures failed to get above freezing and that ended today,” Cogill said. “Temperatures at the Des Moines airport were up to 38 degrees.”

The 10 days below freezing marked the longest consecutive stretch of high temperatures less than 32 degrees in November across Iowa. The old record of 8 days was set in November of 1985. Eastern Iowa is forecast to receive some rain Saturday into Sunday, with foggy conditions possible statewide. Colder air is expected to return to Iowa on Monday with a chance of scattered snow showers.