You are here: Home / News / David Young will enjoy the holidays and then go to work 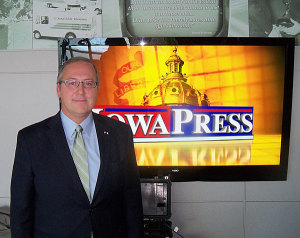 David Young will have a little time to catch his breath before heading to Washington, D.C. where he will take over in his new job as the congressman representing Iowa’s third district.

Young, a Republican, was in the nation’s capital recently for orientation, and is now back in Iowa. “I’ll spend Thanksgiving with the family and then will continue to do some visits and meetings here in the 3rd district,” Young says. “January 6th is swearing in and I’m looking forward to that because I am just looking forward to getting to work and we’ll start the 114th Congress.”

Young first announced he was running for the U.S. Senate, then changed to run for the U.S. House after the retirement announcement of Tom Latham. He finished 5th in the Republican primary, but then won the nomination at the party convention when none of the candidates won it outright on primary night. Young then went on to win the general election and finds himself ready to join the Iowa delegation.

“It is setting in and it will really set in when I’m sworn in, and that’s when it’s really real,” Young says. He did find out the location of his Washington office while at the orientation. The 57 new members of the House got to draw for office space. “I drew 47th out of 57 in choosing space. I came down to the fifth floor of Cannon, which they kind of call the attic,” Young says. “And Tom Latham started there, and I learned that Nixon started up there as well as J.F.K. We were just anxious to find our space so we could build our staff, and it’s five-one-five House Office Building.”

Young says he got a chance to talk with Iowa’s other new congressman, Rod Blum while at the orientation. And he talked with returning congressmen, Steve King and Dave Loebsack as well.