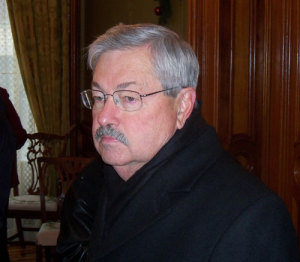 Governor Terry Branstad says the delay of the EPA’s change to the rule that sets the amount of renewable fuels used in the country is a mixed decision for Iowa. Branstad says it was good to see the EPA is waiting to change what’s called the Renewable Fuels Standard. “We’re disappointed because of the uncertainty,” Branstad says. “We thought the recommendation was bad, and as you know, we testified very vigorously and resisted it strongly. We’re pleased that they didn’t implement it.”

Branstad says he would have rather seen the EPA junk the change altogether, and he’s not sure if the added delay signals good news. “Well, I think that it’s good that they didn’t implement the proposed rule, but the delay also creates continued uncertainty,” Branstad says. “If we had more certainty, I think we’d see more expansion and more ethanol and cellulosic ethanol plants built, which would be good.” Branstad says the uncertainty hurts farmers as the price of corn is now below the cost or production.

He says the price of corn had always been above the cost of production with the RFS in place. On another topic, the governor says it’s unclear how the presidents action on immigration will impact Iowa.

“Well we don’t know and we are in the process of reviewing and trying to determine that. There are also constitutional questions about whether the president of the United States has the authority to act unilaterally on issues like this,” Branstad says. “So, I expect there’s going to be a lot of unanswered questions that we need to get information about and what impact it would have on our state.”

Branstad says doesn’t know how many illegal immigrants might be in Iowa that would be impact by the president’s action. “I don’t. And the federal government has not been forthright in sharing with us information with us on the ones that have been placed in our state. So, we have no way of knowing,” Branstad says.

The governor campaigned on the notion that the state is in much better financial shape than when he took over four years ago. He says while that is the case, it does not mean there’s more room in the state budget this year. “No, it doesn’t because we have made some big commitments. One is property tax relief — it’s a $4.4 billion commitment over a decade — and we also have the teacher leadership plan, which provides an additional $50 million a year each year to reward teachers for taking on more responsibility to improve education,” according to Branstad.

He says the current economic situation continues to be a concern as they move into budget negotiations. “Revenue is falling below expectations due to the disastrously low price of corn,” Branstad says. “And so agriculture which has been an important part of the Iowa economy and has really helped us do better than other states in recent years, has been hurt by the EPA and what they have done with the renewable fuel standard. “We’re going to have to continue to be frugal and careful.”

Branstad made his comments to reporters following the annual ceremony to pardon two Thanksgiving turkeys.