You are here: Home / News / Thanksgiving travel expected to be busiest since 2007 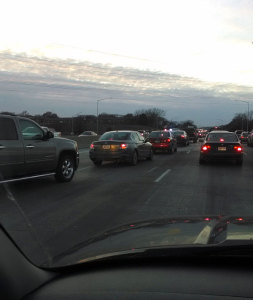 AAA-Iowa says you can expect to see a lot of cars on the highways this Thanksgiving.

Many thousands of Iowans will be on the road this week and their Thanksgiving holiday travels could be hampered by wintery weather. Forecasters say up to three inches of snow is likely this afternoon into tonight for a wide section of eastern Iowa, while more snow is predicted for much of the state tomorrow night into Wednesday.

Rose White, at AAA-Iowa, says travelers will have plenty of company. “Forty-six-point-three million Americans will journey 50 miles or more from home during the Thanksgiving weekend which is the highest volume for the holiday since 2007,” White says. “It shows a 4.2 percent increase over last year.”

Gasoline prices in Iowa have dropped to the lowest levels in many months, falling more than 30-cents a gallon from last Thanksgiving, while the cost to fly has risen slightly. “Airfare prices are only up about 1%, fuel prices are down substantially,” White says, “but we are expecting hotel prices to be up about 8 percent and if you’re renting a car, prices are up about 10 percent more.”

Some people prefer to rent a car for long trips so they don’t put the miles on their personal vehicles, but White notes it’s getting pricey. “Ten percent is significant so you just need to budget more for car rental expenses,” White says. “Keep in mind though, you’ll incur the savings when you fill up that vehicle.” Regular unleaded gasoline is averaging $2.81 a gallon in Iowa, the same as the national average. The Iowa price is down 32 cents a gallon from a year ago.

White says travelers are expected to spend an average of $573 over the course of their Thanksgiving holiday travels.