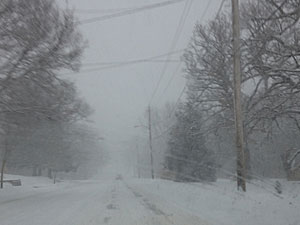 There’s a good chance of a December ahead that’s actually warmer than the November we just finished, according to the state climatologist. Harry Hillaker says it was a particularly chilly November and the snowiest November Iowa’s seen in 23 years.

“Temperatures for the state ran about 7 degrees below normal, our coldest November since 1996 and it actually ranks the 7th coldest November among 142 years of records,” Hillaker says. “It’s pretty unusual to see a November this cold.”

Some Iowans love the snow, but many of us were displeased at the amount of flakes that fell during the month, especially since it’s still technically still fall until December 21st. “On the snowfall end of things, I was kind of surprised when I looked these numbers up, but it was our snowiest November since 1991 for a statewide average of 5 inches of snow, which is about double the usual amount for November,” he says.

Hillaker says December could bring some warmer weather to the state. “Generally speaking, we’re looking for December temperatures probably to end up being above normal,” Hillaker says. “Obviously, we’re quite cold on this first day of the month, but by Thursday or so, we may be up a little above normal and we look to be staying that way, at least for the foreseeable future.”