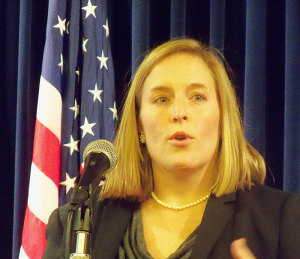 The annual “Celebrate Iowa Gala” fundraiser on December 12th will recognize the 45th anniversary of the filming of the movie “Cold Turkey” in Iowa, and just this past summer, the 25th anniversary of the movie “Field of Dreams” was recognized. The state film tax scandal brought a halt to movie production in the state for a time, but Governor Terry Branstad says the state is recovering with a new wider approach.

Branstad says it involves commercials, television and all types of video. “So, it has changed over the years, but the entertainment industry is still a very significant industry in our state,” Branstad says. The tax credit scandal came in the previous administration, and in May of 2013 the state launched Produce Iowa, the state Office of Media Production under the Iowa Department of Cultural Affairs.

Mary Cownie is the director of the department. “The past two years what we’ve really focused on is rebuilding Produce Iowa from the ground up, and that’s why it’s called the Office of Media Production,” Cownie says, “because it’s not just film anymore. And we have to be able to figure out how we can best serve the media industry across Iowa.”

Cownie says the work the last two years has been reaching out and letting people know what Iowa has to offer. “Being able to build those relationships that frankly I think we had lost touch with and didn’t take advantage of,” Cownie says. “With people like Norman Lear, with people like Tom Arnold. We have a lot of producers, writers, what not on the coast, but also look at the Writers Workshop at the University of Iowa. We have a great animation school in southeast Iowa. We have to be able to build these relationships to and be able to support the creative sector.”

Lear directed “Cold Turkey” and will be featured at the Celebrate Iowa Gala. Lear worked on other films such as “The Princess Bride” and “Stand by Me” and produced several television shows, including “All in the Family” and “The Jeffersons.”