You are here: Home / News / Deer numbers down, but plenty still available as shotgun season opens 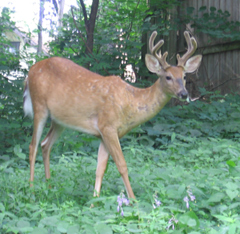 The first shotgun deer season opens Saturday, and while the number of deer taken each year has dropped 33-percent since 2006, a DNR expert says the prospects for this season remain good.

“Deer numbers are definitely down from what they were a few years ago, but there is lots of good hunting available. And because last year we had probably a little bit reduced harvest in some areas, there should be some good hunting opportunity. And with the weather, it will be a great time to be out there,” according to DNR wildlife research supervisor Willie Suchy.

He says your success in the deer hunt depends on where you go. “We’ve got good deer numbers in much of the state where there is good deer habitat. And the best habitat is in southern Iowa and northeast Iowa and parts of western Iowa,” Suchy says. “One change this year would be from northwest Iowa, the first-season shotgun hunters can only shoot antlered deer. That’s a restriction to try and protect that herd up there a little bit.”

The state had increased the number of licenses for does or female deer when they wanted to trim the herd, and now have cut antlerless tag quotas in 72 counties. “Outside northwest Iowa hunters can still shoot does, they just have to kind of think about what’s the best thing to do for where they hunt,” Suchy explains. “We adjust those things annually based on harvest and that’s an important part of what hunters can do as well to help us manage deer, is to report their harvest.”

Hunters are required to report taking a deer within 24 hours. Suchy says Iowa deer hunters tend to have some experience. “In general, hunters are reflective of our society. We’ve got a lot of traditional hunters who started when they were young like me, who are in their 50’s and 60’s and 70’s. And we’ve got some newer ones — don’t have a good handle on the younger hunters — but we do a lot to try and encourage hunting,” Suchy says.

He says they getting young people involved in hunting is a challenge, the same as it is for other pursuits. “Having opportunities available seems to be the biggest thing, the thing that keeps hunters from going into the field is they just have so many other things to do and opportunities to spend their time at,” Suchy says. “If its too hard of a thing to get access to hunting or know how to do it, it becomes a bit of a problem.”

Whether you are young or old, Suchy says you have to follow the proper precautions when hunting. Suchy says the biggest thing they emphasize is safety. “Wearing hunter orange is the best first step, and then the second step…you should always know where you are shooting, so you are not shooting at somebody else in the party,” Suchy says. The first shotgun deer season runs through December 10th. You can find out more about the deer season on the DNR’s website.