You are here: Home / Sports / Cyclone men back in action against Missouri-Kansas City 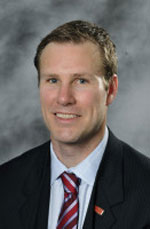 The Iowa State basketball team returns to action on Tuesday night by hosting Missouri-Kansas City. It will begin a busy week for the Cyclones who are 5-1. “It’s a unique week with 3 games in a very short amount of time. Not only Iowa on Friday, but then you play Southern in an afternoon game,” ISU coach Fred Hoiberg. He says they were able to bounce back after their first loss and he thinks they have a good mindset right now.

Missouri-Kansas City is 3-6 but opened the season with a 69-61 win at Missouri and Hoiberg says they were leading K-State in the second half. He says they will play hard and they will have to play well against them. Hoiberg says it will be important to not let UMKC gain confidence. “We have to get off to a good start, that is important obviously in any game,” Hoiberg says.

Hoiberg is not concerned the Cyclones will look past Tuesday’s game to Friday’s contest with Iowa as he says they will make sure they are focused and says they know they are not good enough to overlook anyone.