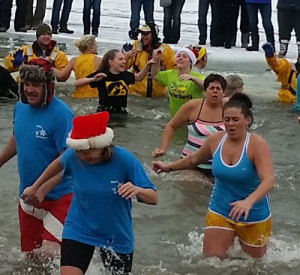 Despite 30-mile-an-hour winds creating a wind chill in the teens, around 400 people took a dip in Clear Lake on Sunday afternoon.

Polar Bear Club members raised more than $13,000 for Make-A-Wish and Toys For Tots. For Shae Philip of Mason City, it was her fourth time taking the plunge as a member of the Hayden’s Hope group which supports Hayden Despenas of Mason City, who has Muscular Dystrophy and has received help from Make-A-Wish.

“It’s a very different experience,” Philip says. “Three years ago when I started, it was pretty warm and each year, it’s getting colder and colder but it’s getting better and better.”

Michelle Casey of Mason City was part of the “Mercy for Percy” group. It was her sixth time jumping into the lake, but she says it’s different every time. “It’s always a surprise,” Casey says. “You never get used to the feeling when you get into the water. I’ve done it for Make-A-Wish and Toys for Tots. We arrange a Mercy group and have 30 to 50 people who jump. We’ve always felt it’s a worthy cause.”

Fourteen-year-old Sophia Willis of Clear Lake had watched previous Polar Bear events and she and a friend decided they’d try it this year. “I wasn’t really that freaked out until I saw the water and then I was like, oh, this is real,” Willis says. “It wasn’t that bad at first and then your feet just went numb and then it was like, oh, this is happening.” Jody Trygstad is a native of Rockford but lives in Brandon, South Dakota. He says he took his first Polar Bear dip after a friend talked him into coming back to town to participate in the event.

“Going in, it was awesome, getting back out? Oh my gosh, it was…I don’t know, I couldn’t move,” Trygstad says. “I was sitting in the water and couldn’t get back up. A buddy was worried about me but I got back up. Holy cow. It just hits you all at once.” Sunday was the 17th year the event has been held in Clear Lake.