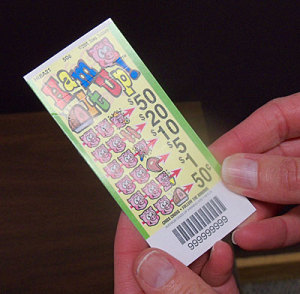 Declining sales of pull-tab tickets have dropped the money available to the Iowa Veterans Trust Fund.

The Iowa Lottery will ask state lawmakers to change the way lottery proceeds are used to fund the Veterans Trust Fund during the upcoming legislative session. Lottery vice president, Mary Neubauer talked about the issue during Tuesdays Iowa Lottery Board meeting.

She says the legislature asked for the program and the organization now dedicates proceeds from the sale of designated scratch and pull-tab tickets to the trust fund. “Back when we initially were discussing the idea all those years ago, legislators said ‘how much do you think you could raise each year for this project,’ and we had estimated between two and three million dollars,” Neubauer explains. “And we have been able to hit that every year until this last fiscal year when we fell below that two million dollar mark.”

The lottery turned over $1.8 million to the fund in the last fiscal year. The Iowa Lottery is proposing that $2.5 millions in lottery proceeds automatically go into the Veterans Trust Fund every year, instead of depending directly on ticket revenue.

Neubauer says a drop in pull-tab sales led to the drop in funding this year. “They are a product base that has been in decline for a number of years with the lottery. It’s just player tastes have change over time and we know as pull-tab sales continue to decline over time, it’s going to pull down our ability to help the Veterans Trust Fund. But ultimately, the bottom line goal for this overall project was to have a stable source of revenue for the Veterans Trust Fund,” Neubauer explains.

Some Iowa Lottery Board members expressed concern that the change would take away the element of people being able to go in and know they were purchasing a ticket just to help veterans. Neubauer says that’s something veterans groups have mentioned too. Neubauer says members of the veterans groups say they have liked the idea of going in an purchasing a ticket to help veterans, but they also understand the bottom line is to provide stable funding.

Lottery Board members also discussed how changing to a continuous funding would make other groups want to get lottery funding. Neubauer says the proceeds from the Iowa Lottery now go to the general fund and the legislature decides how they are spent. “And I suppose it is possible that other groups could come forward and says ‘well now could I have some lottery money too?,’ and in that case that would be a decision for the legislators to make,” Neubauer says. “Ultimately it’s the legislature and the governor’s office which will have the final say on whether this proposal would move forward. Neubauer points out it won’t be any new money that will go to the Veterans Trust Fund, it will just be a different way of handling that funding.

The Iowa Veterans Trust Fund helps provide several benefits to state veterans through the Iowa Department of Veterans Affairs. The Iowa Lottery program has sent more than $16 million to the fund since its inception.