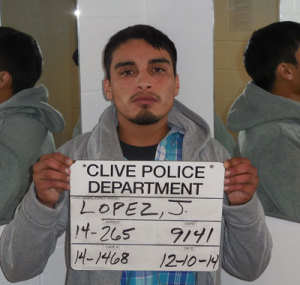 Police in the Des Moines suburb of Clive say the man accused in the death of a young girl is the boyfriend of the child’s mother. Twenty-month-old Ruby Alvarez died at Blank Children’s Hospital in Des Moines on December 3rd. Clive Police Chief Michael Venema Ruby was taken to the hospital early on the morning of November 29th by her mother, 23-year-old Nisa Alvarez, and 25-year-old Joe Lopez.

“Ruby was found to have multiple serious injuries, including a skull fracture and multiple broken ribs,” Venema said. “Alvarez and Lopez reported that Ruby had been injured in a fall in the apartment at 2 a.m. These injuries did not appear to be consistent with a fall.”

Lopez was arrested last night and is now in jail on charges of first-degree murder and child endangerment resulting in death. “It is alleged that he intentionally used unreasonable force, torture or cruelty against Ruby and his actions manifested in extreme indifference to human life,” Venema said at a news conference this morning.

Nisa Alvarez, the child’s mother, also told investigators that Ruby’s injuries were the result of a fall. Venema was asked if Alvarez could also face charges in the case. “What I can say is the investigation is ongoing,” Venema said. “We have reached a certain point where we have probable cause to arrest (Lopez) for causing those injuries, but the investigation does continue.” Lopez is being held in the Polk County Jail on a $1 million bond. The Polk County Medical Examiner’s office conducted an autopsy, but the results have not been released.