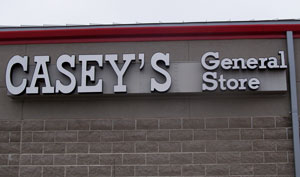 He says the Ankeny-based chain hopes to add pizza delivery to 70 more stores, but has already cut delivery in some areas. “Effective December 1st, we discontinued delivery in 21 locations and reduced 60 stores to delivering four days per week,” Walljasper says. “We’ve also modified our delivery hours for the remaining stores in the program.”

Walljasper says the analyzed all the information on the stores which were delivering pizza so they could take action to make the operation profitable. “You either discontinue the delivery, or modify the hours in an effort to reduce operating expenses, because in those particular hours they were just not generating the appropriate amount of revenue to either justify the delivering, or days of the week being delivered that I mentioned,” Walljasper says.

Casey’s began as a company that had stores in smaller towns in the state, and have expanded in recent years to larger cities. He says that’s where they have had the most success in the pizza business. “The locations that we see as most prevalent are stores that are a little bit higher populated stores than our store base in order to take market share from somebody. And so those are the stores that we’ll be targeting going forward,” Walljasper says.

The company has also been running a test recently for on-line sales of pizza. “Just to make sure that there are no glitches in the programming, it’s gone very well,” Walljasper says. “We’ll continue to roll that out here in the Des Moines metro areas in the next several months, and then continue to monitor that and roll that out accordingly. We are excited about that program.” He says they only been running the tests on a small scale with members of the company using the on-line system to order from the stores in Ankeny as they look to work out any bugs.

Walljasper was asked about the on-line efforts of rival Dominoes and how they have impacted the sale of the pies at Casey’s. He says he can’t say how that may be impacting them because they may not be competing directly with all their stores, but he says the sale of food produced in the stores has increased in the last quarter, which is a positive sign.

Walljasper says the price of cheese had been and issue for them as it had been averaging $2.43 a pound in the second quarter, compare to $1.97 cents for the same period last year. He says the price has now dropped to $1.85 a pound, which has help them meet their goals for the amount of money they want to make on the sale of their instore products.