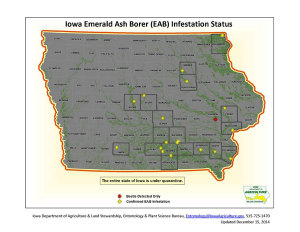 State forestry experts say the Emerald Ash Borer has been discovered for the first time in a rural woodland area in 5 southern Iowa counties.

State Forester, Paul Tauke, says the borer infestation was found by a forestry contractor who discovered many dead ash trees in Lucas County. The infestation was also found to have spread into nearby Mahaska, Marion, Monroe, and Appanoose counties.

“We’re starting to see that baseline population where we are not just seeing symptoms and signs, but we’re seeing our first tree mortality on a larger geographic scale,” Tauke says. There are now 18 confirmed counties with an EAB infestation and he the latest discovery marks a new level for the infestation. “I think the take home message probably is is ‘hold on to your seatbelts’ because we’re going to continue to see new EAB infestations and probably more counties at a more rapid rate than we have,” according to Tauke.

Up until now, the infestations had slowly been discovered in a few counties at a time. “(Up to) 2014 we’ve added 13 counties, and now we’ve added 5 counties just this week,” Tauke says. “We’re going to see that population continue to expand and probably see increased mortality of ash trees and increased incidents of new finds.”

There have been some treatments that appear to be helping tree owners protect individual ash trees, but Tauke says those treatments aren’t the answer for large woodland owners.

“For rural landowners, treatment is going to be cost prohibitive in their woodlands,” Tauke says. “However what they can do, is monitor their forest land or their wood lot for the obvious signs and symptoms — the woodpecker flecking, the thinning of the crown — but also what they can do is contact their district forester who can come out and develop a management plan for them.”

He says that management plan can help them get some benefit from the trees before the bugs hit. “If the ash are large enough, they may be able to salvage some of those and get those removed by the lumber industry or loggers. So, there are some options for woodland owners. While treatment is not really a good option, good forest management is always a good option for them to pursue,” Tauke explains. The infestation in southern appears to have been in place for several years and could include miles of trees.

DNR forest health specialist Tivon Feeley says the cost of this infestation will be in the millions before it is over. “We worked with a Forest Service analysis on this a year ago,” Feely says. “We looked at the impact to the forest land owners and wood products industry out there, the and the number that we came up with was 27 million dollars that was an annualized loss over a period of time in Iowa’s perpetual future.”

A statewide quarantine was issued in February of this year restricting the movement of hardwood firewood, ash logs, wood chips and ash tree nursery stock out of Iowa into non-quarantined areas of other states as a way to try and prevent the movement of the beetle.