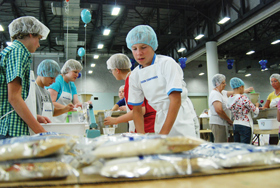 Volunteers package Meals from the Heartland.

A new federal report ranks Iowa 7th in the country for the percentage of residents who spend time volunteering.

Wendy Spencer is CEO of the Corporation for National and Community Service, the federal agency in charge of volunteering and service. She notes the most popular volunteer activity in Iowa involves donating food or preparing meals for the needy. That’s also the case for most other states.

“In Iowa, it’s 32-percent, so that’s very high and that’s one of the top ways people can help,” Spencer says. “I think, in general, Americans don’t like the idea of anyone going hungry.” Utah is once again ranked as the top state for volunteerism. Idaho, Minnesota, Kansas, Wisconsin and Nebraska round out the top six, followed by Iowa.

Spencer says there are a number of reasons why states with a lot rural communities tend to have higher volunteer rates. “For example, low commute times…so, it’s easier to get around. There are higher densities of nonprofits, higher education levels, and high levels of home ownership — that could indicate to us that people are settled in to their community and they really care. They want to make sure their community is strong and vibrant and they want to help,” Spencer says.

The report states slightly more than 1 in 3 Iowans (34.7%) volunteered in 2013. The study also calculated the economic value of those volunteers.  “Of the nearly 800,000 volunteers serving statewide, the value of that is $1.5 billion in economic value to the charities, nonprofits and faith organizations,” Spencer said. Nationally, one in four Americans volunteered last year.

The report found those between the ages of 35-44 had the highest volunteer rate, while those over the age of 65 spent the most time volunteering.