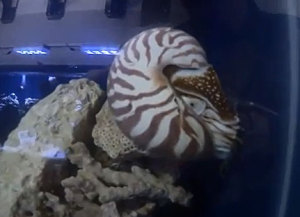 Some animals that live deep in the South Pacific Ocean have a new home in Iowa. The Des Moines Schools Central Campus aquarium sciences program recently received 5 nautiluses from a fish supplier in Japan.

“They’re one of the oldest animals on the planet. Their ancestors can be traced back about 500 million years,” Barord said. The shelled creatures live about 2,000 feet below sea level.

“We keep them in a dark aquarium because they normally don’t see sunlight,” Barord said. “They don’t have very good eyes, but you can fish them pretty easily. They live so deep, but you can catch them very easily, which is why we’re interested in their conservation — to try and save them.”

The five nautiluses shipped to Des Moines are only 3 to 5 years old and are about 5 inches in diameter. The creatures are being fished for their shells. According to Barord, the large shell from a 50-year-old nautilus is sold in shops around Australia and the Philippines for up to $100. It’s highly unusual for a high school in the U.S. to obtain the animals.

“Considering there are only a handful of university-level research places in the world that work with nautilus, this is one-of-a-kind,” Barord said. “I can’t imagine there are any other high schools working with nautiluses or having this opportunity. I’m sure if a nautilus has ever stepped foot in Iowa.” Barord was quick to correct himself — nautilus don’t have feet. Instead, they have up to 90 tentacles.