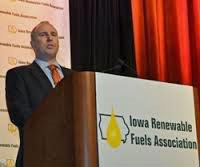 “Part of it was the combination of relatively high crude oil prices for most of the year, although that tailed off certainly and the great harvest we had,” says Monte Shaw, executive director of the Iowa Renewable Fuels Association. “We had a lot of corn. Corn prices came down and ethanol demand was robust in the United States, but we really surged because of exports.”

U.S. ethanol exports jumped 31 percent this year. Shaw says domestic ethanol production could have jumped even higher if the federal government hadn’t delayed its decision on the so-called Renewable Fuels Standard which sets the level of ethanol required to be blended into gasoline.

“Ethanol is the world’s cheapest source of octane and we’ve steadily grown our export markets,” Shaw says. “We’d much rather be growing above the E10 threshold here in Iowa and nationally and using it to lower gas prices here at home, but right now the oil companies are not really giving us much of a chance to offer E15 to consumers.”

Ethanol production had leveled off in the past couple of years, but Shaw sees growth ahead.

“I think you saw a record harvest here in 2014, so the ability for us to go even further is absolutely there in 2015,” Shaw says. “It’s just a matter of giving our a consumer the choice for these higher blends at the pump like E15 and E85.”

Iowa is the nation’s top ethanol-producing state. About 27 percent of all the ethanol made in the U.S. in 2014 was made in Iowa. A huge chunk of that leaves the state, because less than 200 million gallons of ethanol was used in Iowa fuel this past year. 2014 was also the first year a small amount of Iowa’s output was “cellulosic” ethanol — made made from corn stover and corn kernel fiber.