You are here: Home / Health / Medicine / State parks bureau encourages you to take a hike on New Year’s Day 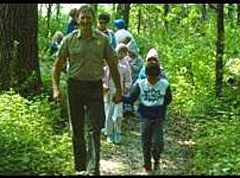 The head of the state parks bureau is encouraging you to make plans to take a hike in 2015.  Parks bureau chief Todd Coffelt says they are planning events in five state parks.

“The state of Iowa and the state parks bureau, we’re participating with a national effort to get people to state parks enjoy a first-day hike,” Coffelt explains. “It’s an opportunity to meet with staff and enjoy the resources in their local community, and to be outside to help get that New Year started off in the right way.”

He says New Year’s Day is a good time to start the new tradition. “This is a great opportunity to maybe go do something you haven’t done before, or even if you are an expert and have done it many times, you can share that experience with other people who may be there for their first time. And really share that opportunity to talk and take shelter at a warm place in the park. But, get outside and some of Iowa’s wildlife,” according to Coffelt.

“They’ll have a fire going to help people stay warm, but they’re also gonna have treats,” Coffelt says. “A lot of these parks have friends groups that’ll be involved as well. The lodge will be open, will have some shelter, we’ll have some warmth, just in case it’s a little bit chilly.”

Coffelt says most people probably don’t realize the state parks are open all year. “For those who are really brave and have the right facilities, they could go camp in them right now,” Coffelt says. He says they won’t have the shower house or flush pressrooms open. But he says there are still paths to go hiking and a lot of wildlife to see in the parks this time of year. He says there are a couple of sites to find out about the First Day Hikes. “WWW.iowadnr.gov for the state website, or at the national level if you want to see what’s going on in states across the country, you can go to, www.naspd.org,” Coffelt says.

Coffelt says you can get an early start, or just go out after watching some football. Coffelt says, “You can get out there and enjoy the fresh air and really put a wrap up to the holiday season, and like I said, kick off that New Year’s Day.” First Day Hikes started more than 20 years ago at the Blue Hills Reservation state park in Milton, Massachusetts.