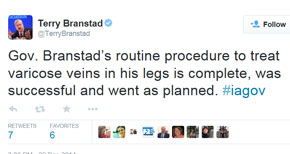 A tweet was sent on the governor’s twitter account shortly after five p.m. Monday to announce that Branstad’s surgery “was successful and went as planned.” The surgery to treat varicose veins in both of Branstad’s legs is described as “routine.”

Branstad, who is 68 years old, is to be off his feet and rest as much as possible for a week. Branstad has no public events scheduled during this recuperation period and his staff announced last week that the governor will resume his regular schedule on Tuesday, January 6.

Branstad has kept to a regular schedule of exercise and a restricted diet since he suffered a heart attack in December of 2000. Doctors inserted a stent in his heart to keep an artery open after the attack then, in May of 2010, doctors found a partially-blocked artery in Branstad’s heart during a routine test and a second stent was inserted in the governor’s heart.