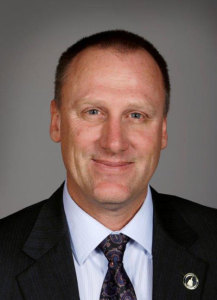 Voters in a state senate district in southwest Iowa have selected a farmer from Imogene to replace Joni Ernst. Ernst resigned from the seat in late November, after Iowa voters elected her as the next U.S. Senator from Iowa. Republican Mark Costello won today’s special election and will be sworn in a state senator in January.

Costello, who is 53 years old, won a seat in the Iowa House in 2012 and he was reelected to the House in November. Now Costello will represent the six southwest Iowa counties of Senate District 12. Turnout in today’s election was sparse, but Costello was the overwhelming selection of those who did cast ballots.

“I’m so grateful to them for supporting me like this,” Costello said. “I love it that they show that confidence in me. It makes me feel really good.”

According to results posted online by the Iowa Secretary of State’s office, 4161 ballots were cast in Tuesday’s special election and Costello got almost 74 percent of the vote.

Republicans held a majority of seats in the Iowa House in the past two years Costello has served there, giving the GOP the ability to control the debate agenda, but Democrats control the state senate. Costello will join 23 other Republicans in the state senate and be in the minority. He considers the senate a “good opportunity” to “affect legislation.”

“I’m looking forward to being a part of that team for the next two years,” Costello told Radio Iowa. “I’m always optimistic. I’m hopeful that my side will take control in a couple of years.”

Costello is a graduate of Nishna Valley High School. He graduated from the University of Northern Iowa in 1984 and work for five years as a computer programmer for Garst Seed before returning to his family’s farm. Costello and his wife, Rachel, have five children. The family raises corn, soybeans and registered Simmental cattle on their farm near Imogene.