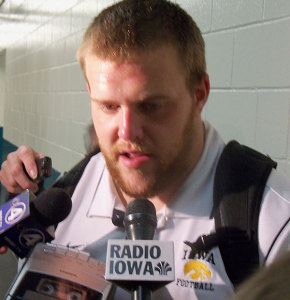 The Iowa Hawkeyes got down by 28 before they got on the scoreboard in the Taxslayer Bowl and never got into the game with Tennessee, losing 45-28.

Senior All-American offensive tackle Brandon Scherff agreed with those who said the start to the game was embarrassing. “I think it’s embarrassing also, but obviously I’m glad we showed a little fight in the second half there. Too bad we were down that much, because it would have been a good football game after that,”Scherff said.

Iowa alternated quarterbacks Jake Rudock and C.J. Beatherd to start the game, but Scherff didn’t think that had anything to do with the slow start. “I think it kind of gave us an advantage because C.J.is a mobile quarterback, be he is also not afraid to sling it, so they’ve got to be ready for both,” Scherff said. He said Jake Rudock is a smart quarterback who also knows how to pass. “So, I think it gave us an advantage, but they outplayed us.”

Scherff said it was not the way he had hoped his Hawkeye career would have ended, but said he was happy with all he had accomplished overall. 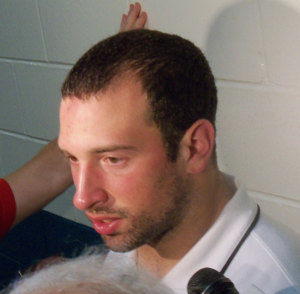 Coach Kirk Ferentz said the team had some of the best weeks of practice he has seen leading up to the game, and senior running back Mark Weisman said it was tough to not show that on the field.

“Yeah, it’s frustrating, it definitely didn’t show on the field, but that work didn’t go for nothing,” Weismann said. “A lot of guys got better, a lot of younger guys got better. The future of this program is bright, there were a lot of good guys making good plays out there.”

Weisman ran for Iowa’s first score, but it was after they Hawks had fallen way behind. He says the team has to do a better job of getting the momentum. “We need to get that, we need to find a way to get that no matter what….it didn’t go our way today, give them credit though, they made plays, they executed, we didn’t,” according to Weisman.

Scherff and Weisman are among 16 seniors the Hawkeyes will lose this year. Iowa finished the season at 7-6.