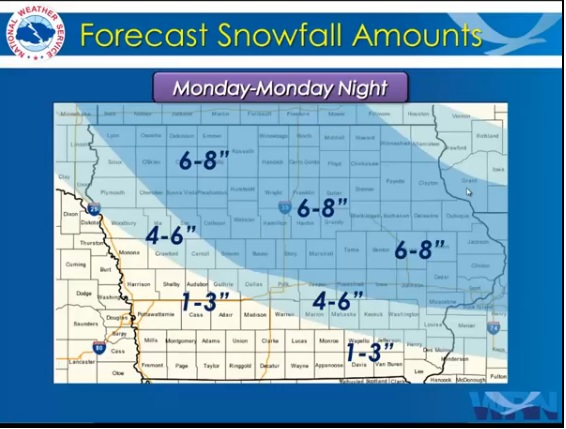 “The storm will produce moderate to heavy snowfall accumulations, generally in the four to eight inch range, extending from northern through central and into eastern portions of Iowa,” Lee said. “The heavy snow will fall on Monday afternoon and evening, causing slick roads and travel difficulties during the afternoon commute in many areas.”

The National Weather Service predicts wind speeds of 15 to 20 miles per hour and perhaps even higher in some areas as the snow is falling.

“As snow tapers off Monday night, very cold air will stream into Iowa resulting in wind chills of 20 to 30 below zero by Tuesday morning and even colder on the following days,” Lee said in the video.

Snow fell across much of Iowa as Saturday night turned into Sunday morning. The Iowa Department of Transportation reported roads in southeast Iowa were completely covered in snow by Sunday, with most of the rest of the state’s roads at least partially covered in snow. Dozens of Iowa churches cancelled services on Sunday morning as temperatures plummeted. By Sunday evening, roads in a chunk of northwest Iowa, including the Sioux City and Fort Dodge areas were still partially covered in snow. Snow was also causing Sunday night travel problems north of Davenport and in a triangular section of southeast Iowa that stretched from Iowa City, down to Ottumwa and then over to Burlington.