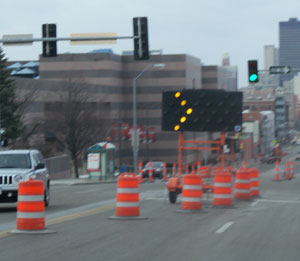 The governor says he will give legislators a variety of options to fund more road improvements.

Governor Terry Branstad is planning to present legislators with a “whole series of options” to raise the amount of tax revenue available to repair and expand the state’s transportation network, but he won’t indicate which proposals he prefers.

“If you say, ‘This is what I recommend,’ then you give people something to shoot at,” Branstad said this morning during the Associated Press Legislative Forum at the statehouse. “…What I intend to do is take this approach: ‘These are all ideas I think that could be acceptable to me. What’s acceptable to you?’…Then everybody will have some ownership in it and hopefully we prevent it from becoming a political football.”

In addition to a hike in the state’s per gallon tax on motor fuel, some of Branstad’s other ideas include raising the fees charged excessively heavy semi loads, collecting more taxes from the owners of electric and hybrid vehicles as well as charging the sales tax on fuel purchases. Branstad also suggested legislators might consider giving cities and counties authority to raise a local option sales tax, to finance local street and road projects.

“I just think we need to seriously look at all of those and decide what is something that could be acceptable and what are things that the legislature feel that, no they wouldn’t want to consider,” Branstad said. “Out of that process I’m hopeful that we’ll come up with a consensus that will get us the revenue that we need.”

According to Branstad, transportation infrastructure is “an important issue” for the state’s economy and the state is near a tipping point. Branstad is suggesting legislators should tackle the problem before spring, while gas prices as low.

“And I believe that the opportunity is there to work with both houses int he legislature on this issue,” Branstad said, “and I’m very hopeful this is the year that we can accomplish it.”

“In half a dozen years that’s effectively gone from zero to now $280 million,” said Paulsen, one of four legislative leaders to speak at the Associated Press Legislative Forum. “That’s obviously a significant concern and, in particular, when you’ve got debt that’s going to outlive the life of the project, that’s not particularly good public policy.”

And that’s one reason Paulsen said legislators “should have a conversation” about other ways to raise the resources needed to fix Iowa roads and bridges. Senate Democratic Leader Mike Gronstal said the governor “could do more” to exert some leadership and get something passed.

“If this is going to be done in a broadly, deeply bipartisan way, we’re going to need his help to get some Republicans to support this,” Gronstal said.

And Gronstal said it’s “really nonsense” for Branstad to suggest Democrats would shoot down a proposal if Branstad announces it’s the plan he favors.

“The time for politics is passed. We have been studious in avoiding locking ourselves into any particular position on this because we want to work together,” Gronstal said. “…We certainly are open to lots of ideas and to considering them. What we need now is for the governor to provide some leadership in that area.”

Gronstal, Paulsen and Branstad made their comments this morning during the Associated Press Legislative Forum at the statehouse.