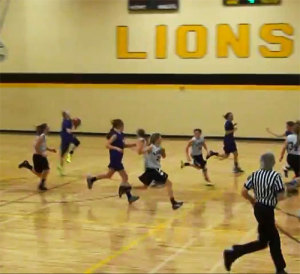 A central Iowa seventh grader has celebrity status after her game-winning, buzzer beater during a basketball game last month. Video of the half-court shot was aired by ESPN during a national broadcast this week. Taylor McKinney of Webster City says she’s still shocked about making the shot and all of the hype that’s followed.

“My teammates were jumping all over me and giving me high fives,” McKinney says. “All of this on Twitter and ESPN, it’s pretty cool.”

McKinney describes what was happening just prior to her big shot as time ran out. “We were kind of struggling in the first half of the game and in the second half we were coming back quite a bit,” McKinney says. “They scored two and I looked up at the scoreboard and saw three seconds left and knew I had to get a shot off. I threw it up there and made it and the crowd went wild and I went crazy.”

With her shot, McKinney’s team won the game 32-to-30. They’re now 2-2 on the season. Thursday afternoon, McKinney and her seventh grade team members will face Iowa Falls Alden in Webster City. She hopes to sink another half court shot this season. See the video of the shot below.