You are here: Home / News / All of Iowa’s congressmen vote for Keystone XL pipeline bill (video) 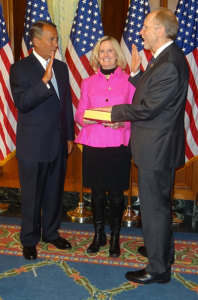 Congressman Dave Loebsack being sworn in by House Speaker John Boehner as his wife Cindy holds the Bible.

All four of Iowa’s Congressmen voted for a bill today to move ahead with construction of the Keystone XL Pipeline that would bring oil to the U.S. from Canada.

Congressman Steve King, a Republican from Kyron, issued a video message after the vote, acknowledging the president has threatened to veto the bill.

“If it gets to the president’s desk and he vetoes the bill, he’s vetoing 40,000 jobs, he’s vetoing 830,000 barrels of oil a day coming into the United States. Canada is our best trading partner, that oil is going somewhere,” King says. He says if the oil doesn’t come to the U.S. for refinement, it will go to China.

The bill passed the U.S. House with 238 Republican votes and 28 from Democrats. “We’ll send this bill over to the Senate, I’m confident the Senate takes it up,” King says. “We needed to pass this legislation early, it’s jobs, it’s economic growth. It helps make us energy independent in the North American continent. It’s good for our trading relations with our great friends and trading partners and neighbors to the north, Canada,” King says.

Freshmen Republican Congressmen David Young and Rod Blum also voted for the bill. Iowa Congressman Dave Loebsack was one of the 28 Democrats to vote for the bill.

“I have long subscribed to the belief that the best course of action regarding energy policy is to move from fossil fuels to renewable forms of energy as quickly and as feasibly as possible. I understand the concerns about the potential impact of the Keystone XL pipeline proposal. At the same time, any decision such as the one regarding Keystone is hardly a simple or easy one to make. Environmental concerns are important, but so are other factors.

“In my mind, one of the most important reasons is the infrastructure jobs that will be created due to the construction of the pipeline. I am fully aware of the short-term nature of the 40,000 plus jobs that will be created by this project. But I cast my vote today in favor of creating these jobs that can’t be shipped overseas and for the countless hardworking men and women who put their hard hats on every morning so that they can put food on the table and help their children pay for college. We have seen Wall Street recover, yet working folks across Iowa and America continue to wait their turn. Our focus must continue to be on improving the economy, getting Americans back to work, and moving our country forward. It is unfortunate that Republicans have refused to move any comprehensive jobs legislation to keep jobs from going overseas. A good first start would be an immediate consideration of a long-term transportation bill so American workers can get back to work and the U.S. economic recovery can be further enhanced.

“Additionally, today’s vote marks only the beginning of the work Congress must do on energy policy during the next session and in the years beyond. First, we must do all we can to reduce carbon at its sources and ensure that polluters bear the costs of their action. This can be done by imposing a carbon fee on the pollution emitted by the use of fossil fuels, with the revenue generated returned to households. We also must extend the Production Tax Credit to continue to spur the generation of wind power, extend the Investment Tax Credit to incentivize the development of solar power, and continue other policies to enable the increased use of other renewable forms of energy. These policies will both protect our environment and create hundreds of thousands of jobs across America. These efforts will continue to move our nation on a path that practically and affordably moves us farther from reliance on fossil fuels and towards significantly more use of renewables.”