You are here: Home / Education / Nature center in Cedar Rapids to use all solar power for new building 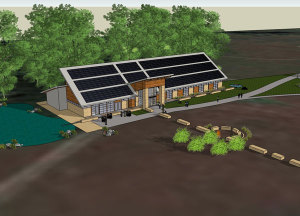 The new Indian Creek Nature Center building will get its power from solar energy.

The Indian Creek Nature Center in Cedar Rapids is partnering with Alliant Energy Company to create a learning center that will be the first of its type in the state.

Alliant spokesman, Justin Foss, says the new building will use all renewable energy for heating, cooling and lighting. “They are looking to get a net-zero building and really focus on sustainablity, and we saw a natural tie-in to be able to build a solar system on that building, so that we can study it and get a lot of education benefit out of that system,” Foss explains.

The nature center is hoping to get the facility certified as a “Living Building,” which requires it to be a net-zero building. “That means that all the energy that that building produces is on site,” Foss says. “So the goal of what we wanted to do is to be able create a solar system — which might involve batteries — to be able to provide all the power that the building would need right there on site.”

The nature center is calling it the “Amazing Space” project and says it will be Iowa’s only sustainable, net-zero energy project. Foss says the project allows his company to study the use of solar power. “You know solar energy is great when the sun is shinning, but we all know the sun doesn’t shine every day. And so, we’re trying to study more about the benefits of it and how that solar energy can interact with our grid,” Foss says.

He says there are a lot of things they don’t know about integrating solar energy into the mix with other forms of energy. “What we want to be able to study is, when does the peak of the solar generating panels hit versus when is the peak of our utility industry’s customer usage,” Foss says. “And so, how do those line up so that we can leverage solar energy to provide the most benefit for us.”

He says they are interested in finding out how the production of solar energy impacts the voltages on the lines and the nearby customers on the electric grid. Foss says the building will also have a portal that allows the public to go on and see in real time how much energy the solar panels are generating and how it supplies the building. It is part of the overall education goal of the nature center.

Foss says the solar power is one area where they can use more background. “We do have several utility wind farms already operating and we are able to learn and get information from those on a real-time time basis already. What we didn’t have was the solar to be able to get that on a real-time basis. We do have hydro facilities that have damed up rivers, and we can get information from those on a real time basis. So this allows us to expand our overall portfolio,” Foss says.

The building is in the planning stages, so there’s no final figure on what it will cost. “Costs are still being developed, what we do know is that we will be able to own this and provide that technology and exchange pieces as we need. We will treat this just like any other generating site that we have,” according to Foss.