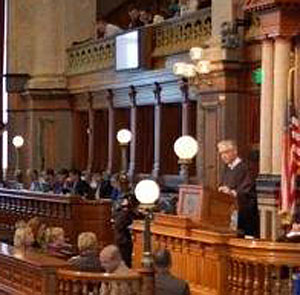 The chief justice of the state’s Supreme Court is raising concerns about “racial disparities” in Iowa’s court system. According to Chief Justice Mark Cady, blacks and other minorities are “overrepresented” in Iowa prisons.

“Iowa incarcerates 9.4 percent of its adult African American males which is third-highest in the nation,” Cady said. “This is a difficult problem, but its conmplexity must not deter us from finding a solution.”

Cady got a standing ovation from legislators for those remarks, made near the end of his half-hour “Condition of the Judiciary” speech to lawmakers. Cady cited a new project in Johnson County to help “low risk” teenagers outside the court system, to “avoid” formal criminal charges. According to Cady, about 10 percent of youth in Johnson County are black, yet 54 percent of kids arrested in Johnson County schools are black.

Cady also mentioned the September 9, 2014 shooting at the Jackson County Courthouse and pledged to work with all levels of government to make sure Iowa courthouses are “more secure.”

“Our courthouses across the state hold a very proud and dignitifed statue in our communities,” Cady said. “But courthosue business — both court and other county services — can, at times, be adversarial and give rise to the fear of violence and even violence itself.”

Cady has worked with the Iowa State Association of Counties to conduct a survey of current security measures at every county courthosue in Iowa and more court and county employees are taking security training, but he said the ultimate goal should be to secure all public buildings in the state.

“While the day of the Jackson County shooting was a tragey, that was the day when tragedy was turned into an unwavering commitment to do everything possible to make sure that every place of justice is a place of safety,” Cady said and legislators stood to applaud.

A man upset over his property tax bill went to a Jackson County Board of Supervisers meeting in September, pulled a handgun out of his briefcase and shot at the county assessor, but missed. The man was tackled by a county supervisor, then by two other people in the audience and a second shot was fired during that struggle, killing the shooter.

Today, the chief justice of the Iowa Supreme Court also delivered a proposed budget for the judicial branch to legislators. It calls for a nearly five percent increase in the budget for the courts.