You are here: Home / Sports / Ferentz confident he can bring football program back 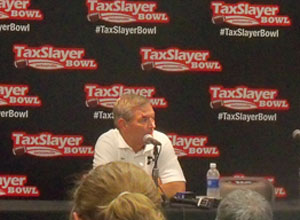 Iowa football coach Kirk Ferentz does not consider next season a last stand but does realize his seat is getting hotter.

Ferentz held a rare January news conference in the wake of growing discontent with the program after a 7-6 season that concluded with an embarrassing 45-28 loss to Tennessee in the Taxslayer Bowl.

“I am coaching the way I did in 1999. Talk about the hot seat, it was a little bit warm I guess in 2000,” Ferentz says. “I’ve never worried about that, pro football cured me of that. You just worry about what is in front of you and try to coach your players as well as you can, that’s what every coach needs to do, and that’s what we are all going to do this year.’

Ferentz says the coaches will evaluate all phases of the game and make changes if needed. “We are probably not going to be a spread team or a run and shoot team. I just don’t see that happening. We don’t have the access to the personnel that some of the folks do that are running the points up,” Ferentz says. “And then the other part is we still believe in playing defense. I got certain philosophical beliefs that I think are pretty much paramount to winning.”

Ferentz says he has not even contemplated retirement and is confident he can lead the program back into contention. “This is what I do so, and I love being here, I think I’ve tried to articulate that. So, from that standpoint I feel very fortunate, I;ve always felt fortunate to be here going back to 1981. This is where I like coaching, this is what I like doing. And all that being said, I know I can do a better job and that’s what we have to do here,” Ferentz says.

Ferentz says he has been spreading himself too thin in the off season. “One of the first things I have to do is do a better job as a head coach, which means spending more time in this building with our people and less time with people on the outside. We built the building, that’s good news. not that I dislike fund raising, but I need to spend more time in here and watch more film,” Ferentz says.

Ferentz named C.J. Beatherd the starting quarterback last week and expects Beatherd and Jake Rudock to return. “I’m hopeful that they will, I’ve talked to both guys and that’s their plan as of last time that we talked, but it can be a fluid process,” Ferentz says.