You are here: Home / News / Chris Christie says Branstad ‘good at both’ politics and governing 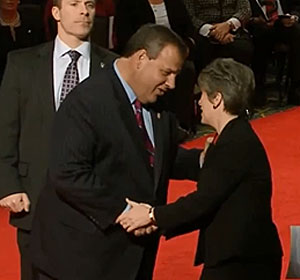 “Branstad’s taught me a thing or two about politics and how to govern. He’s good at both,” Christie said. “And nobody gets elected six times if they’re not.”

Christie has been the chairman of the Republican Governors Association for the 2014 election and he’s attended the inauguration of five Republican governors who won new terms in 2014. 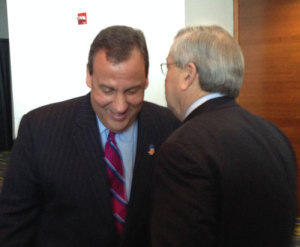 His decision to be in Iowa for Branstad’s inaugural ceremony renews speculation about Christie’s White House aspirations.

Christie was surrounded by Iowans who wanted to have their picture taken with him after today’s inaugural ceremony and many urged him to run for president.

Christie will return to Iowa on Saturday, June 24. He’ll be among the long list of speakers at Congressman Steve King’s Iowa Freedom Summit in Des Moines.