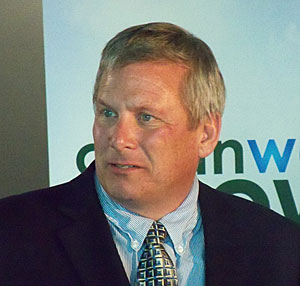 Northey insists there is a “great effort” underway to reduce nitrate levels and those voluntary efforts will work to improve water quality. “I think, over time, we’ve seen some difference already and we’re going to see more difference in the future. So, to me, that’s the best approach,” Northey says. According to Stowe, the cost of treating the water will become unaffordable “if policy makers keep pretending that voluntarism is working.”

Northey says he’ll be meeting with farmers and community leaders to “highlight the progress that has been made” and discuss the potential lawsuit. “I think the legal battle to prove a regulatory approach is legally appropriate and politically comfortable, but to actually go into place, I believe that’s a long, long process before anything actually gets done on the farm,” Northey says. “I’d rather not wait that long. I’d rather go ahead and keep progressing with the kinds of things that we’re doing.”

Northey says there’s been “great progress” through volunteer efforts to reduce phosphorus runoff and soil erosion on the farm — and the same approach will help limit nitrogen runoff. “We see some lakes that had phosphorus issues historically that don’t now, as they’ve worked on projects, and we’re just starting to engage on the nitrogen side the same way we have on phosphorus. So, I really believe that we’re going to be more successful,” Northey said.

Nitrate levels in the Raccoon River have set new records in each of the past four months, prompting the Des Moines Water Works to spend tens of thousands of dollars more for extra treatment of drinking water before it reaches customers’ taps. Today, Northey is scheduled to hold public meetings in Calhoun and Sac Counties. Tomorrow morning, he’ll appear in Buena Vista County.