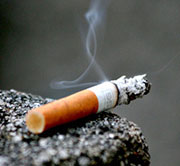 A new report card on Iowa’s efforts to cut the use of tobacco products gives the state one A and three Fs. Iowa received failing grades for its funding for cessation programs, funding for prevention and control and for its tax of $1.36 for a pack of cigarettes. James Martinez, spokesman for the American Lung Association of the Upper Midwest, says Iowa’s grade point average of just one on a four-point scale is “unacceptable.”

“When we’re looking at access to cessation services, in other words, if someone wants to quit smoking, we do believe the state should help them,” Martinez says. “It saves health care costs across the state as well as it helps people make that decision and take that important step in their lives.” Iowa’s only passing grade came for its statewide smoking ban which covers virtually all public places and workplaces.

There’s a toll-free number smokers can call to reach counselors at Quitline Iowa, which offers up to eight weeks of free nicotine replacement therapies. Still, he says the state doesn’t make nearly enough of an effort to fund its cessation and prevention programs. “When you get an F in something like that, it’s alarming,” Martinez says, “and it really calls attention to our leadership in the state to do something about it.”

Iowa gets many millions of dollars every year in tobacco settlement money as well as federal dollars, but only spends a small fraction of it on programs that help people quit smoking or programs to keep them from starting. Plus, Iowa is spending much less on tobacco control and prevention than just a few years ago. While the state invested more than 12-million in the effort in 2008, it will spend less than five-million this year.

“It’s unfortunate that when they allocate the funding for something like tobacco prevention and control programs, they’re not using all of those funds,” Martinez says. “They’re not even using half of what they should be using that funding for. It’s unfortunate.” The report says more than 44-hundred Iowans die every year from smoking-related causes, while 19.5 percent of Iowa adults smoke along with 18.1 percent of high schoolers.

See the full “State of Tobacco Control 2015” report at the website: www.lung.org.