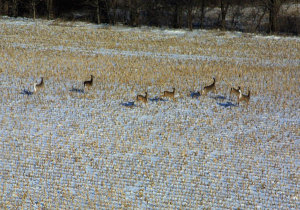 Deer in a field.

“Both of the deer were within a five-mile radius of where the first wild deer that tested positive last year was found — and that’s a little bit southwest of Harpers Ferry in Allamakee County,” Baskins says. CWD affects primarily deer and elk and is caused by an abnormal protein called a “prion” that attacks the brains of infected animals, causing them to lose weight, display abnormal behavior, lose bodily functions and die.

While the disease was detected again, it was only found in two samples. “Certainly our preference would have been to find zero,” Baskins says, “but it means we do need to intensify and get even more sampling done in that immediate area and determine if these were just isolated incidents, or if we may have more out there.” The DNR increased the amount of samples taken in the area where the first wild CWD case was discovered and Baskins says the two positives were from half of the 300 samples taken. He says there is the possibility of more positives once the rest of the samples from that area are processed.

But there have been no other positive tests for CWD in the testing done on deer in other parts of the state. “It should be pointed out that since 2002, we have sampled approximately 57,000 wild deer across the state for Chronic Wasting Disease, and these are the only three which have tested positive so far, and they have been in a five-mile radius of each other,” according to Baskins.

The DNR’s wildlife research supervisor says it is believed last year’s positive CWD test came from a deer that had wandered into Iowa from Wisconsin. Baskins says that could be the case again with the latest positive tests. “As a matter of fact, that’s what we believe is the deer from last year wandered in from nearby Wisconsin. If you go just across the river, that county has had Chronic Wasting Disease for a number of years,” Baskins explains. “We obviously had the one last year that we felt probably crossed, and it’s certainly possible these two are in that same category where they were somehow able to cross the river where CWD had been detected in Wisconsin earlier.”

Baskins says the department is trying to stay on top of the situation to prevent the spread that has happened in other states. He says there is not vaccination to give deer to prevent the disease. “But, they are working on some vaccinations. The other thing that makes CWD monitoring extremely difficult is the fact that there really isn’t a good, reliable live test for CWD, particularly in white-tailed deer,” Baskins says. “For the most part, the only way to really get reliable tests is in some of the organs and some of the lymp nodes that are harvest after the deer has been hunted.”

He says the testing program has gone well thus far. “We have had terrific cooperation from the hunters up in Allamakee County in terms of giving us a lot of samples to work with,” Baskins says. “Right now information is kind of the number one thing that we need in order to formulate an idea of how to stem the spread of this disease.” The DNR says there is currently no evidence that humans contract CWD by eating venison.