You are here: Home / Military / Veterans have their day at the state capitol 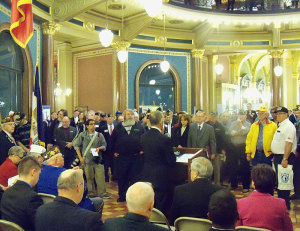 Veterans were honored in the rotunda of the state capitol.

The Iowa men and women who served in the military were honored today at the annual Veterans Day at the state capitol.

Governor Terry Branstad, an army veteran, spoked to the crowd in the rotunda of the capitol. “Last year we had a great year for veterans with the passage of Home Base Iowa, but we’re not done yet, we have more we have more we want to do this year,” Branstad says. “We appreciate all of you being here, and the impact that you can have and the progress that we have made.”

The Home Base Iowa program was launched to try and get those retiring from the military to settle in Iowa.

“We already have over 800 veterans who are employed in Iowa now as a result of Home Base Iowa. We are just a little over six months into this new program. We are excited that the marketing committee will soon be launching nationwide advertising, focusing on especially areas where people will be transitioning out of the military, to make them 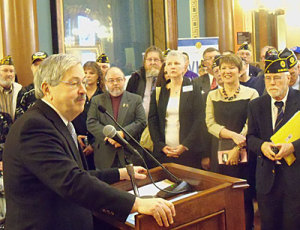 aware of what we have,” according to Branstad.

The governor signed a proclamation declaring 2015 as the “year of the veteran.” The commandant of the Iowa Veterans Home in Marshalltown Jodi Tymeson gave an update on her facility. “We had three very comprehensive inspections in 2014. Now, in healthcare we call them surveys, but you all understand inspections,” Tymeson says. “We had three comprehensive inspections from both the federal and state level, and we passed with flying colors.”

Tymeson is a retired general with the Iowa National Guard and says they are transforming the facility to better serve veterans. “We continue to renovate all of our nursing care rooms to single rooms with private showers, and that makes such a difference in the quality of life for our residents. And we’re on track to complete that by May of 206,” Tymeson says. 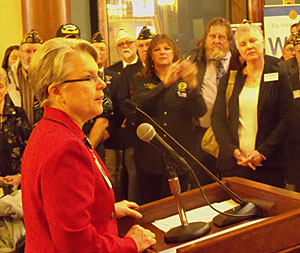 She also took time to thank the veterans. “There are so many of you here who are committed to helping fellow veterans, so thank you for all the work you do on that. Thank you for being here today to show your support for fellow veterans, and may God bless each and every one of you,” Tymeson said.

Several members of the Iowa Legislature were on hand, including Representative Jerry Kearns, a Democrat from Keokuk, who is on the House Veterans Affairs Committee. “I encourage you to contact us in government as needs arise, as ideas, suggestions come from you. We kind of thrive on those, the ideas you bring forth,” Kearns told the veterans. “Critcism is also welcome. If you feel like something is not being done according to what you believe is correct, or if there is something you would like to see changed.”

Kearns tolf the veterans they can contact any branch of the legislature or the governor’s office with concerns.