You are here: Home / Health / Medicine / Branstad back at work with ‘raspy voice’ after a week of rest for flu (AUDIO) 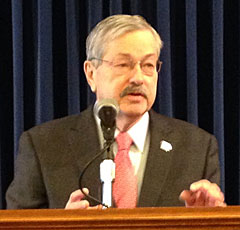 Governor Terry Branstad says he’s “learned a lesson” about the importance of staying home from work when he’s sick. It was a week ago today that Branstad fell ill during a speech and was rushed by ambulance to a Des Moines hospital for treatment of the flu.

“You know, I like to work. I don’t like to miss,” Branstad said. “Once I’ve made a commitment, I like to try to find a way to get there even if there’s a snow storm, but I also think you need to use some common sense.”

“That’s an easy one,” Branstad said, laughing. “I’ve learned my lesson and, yes, I should have listened to my wife. I should not have gone to work.”

The governor is not 100 percent yet, but Branstad was back at the statehouse this morning.

“The doctor said: ‘You’ve doing a lot better, but you need to continue to be careful,'” Branstad told reporters. “I still have a little bit of a raspy voice and I’m going to continue to drink a lot of water.”

Branstad used his weekly news conference to publicly thank the health care professionals who transported him to the hospital and cared for him once he was there.

“I would have preferred not have to spend the night in the hospital, not to have all the tests, but out of precaution they ran all these tests and I did have the responsibility of spending the night in the hospital,” Branstad said. “And hopefully I’ve learned a lesson about not going to work when you’re not feeling well so that we don’t have to go through that again.”

Branstad is 68 years old and suffered a heart attack 15 years ago, but doctors ruled out a stroke or cardiac issues as the cause of this latest trip to the hospital. Branstad, who had varicose vein surgery in December, had a “mild” case of the flu according to his personal physician.

Audio of the governor’s weekly news conference is here. The questions and answers about his health came at the end of the event.