You are here: Home / Fires/Accidents/Disasters / One dead, one critically injured in Atlantic explosion and fire 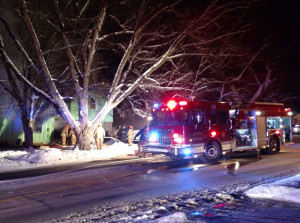 Firefighters say a gas line broke at this Atlantic home, causing an explosion and fire.

A broken natural gas line is being blamed for an explosion and fire in the southwest Iowa town of Atlantic that killed one person and critically injured another. Firefighters were called to the house just after ten o’clock last night and Atlantic Fire Chief Mark McNees says they found the structure engulfed in flames.

They knew people were trapped and launched an immediate search. “We were able to get inside as we continued to fight the fire at the same time and did find the female victim upstairs and brought her down,” Chief McNees says. “She was unresponsive. We began CPR and medivac took over and took her to the hospital. We made another search attack and found the second, male victim.”

The man died. The woman was listed in critical condition at an Omaha hospital. No names were released Neighbors report hearing a loud “boom” prior to seeing the flames. Investigators with the state Fire Marshal’s Office used that information and spent the night combing through the home trying to determine the cause. 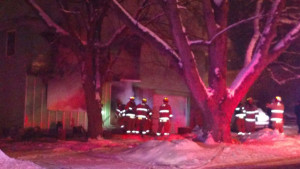 One person died and one was critically injured in a fire at this home in Atlantic.

“A natural gas pipe in the basement broke,” McNees says. “It had a large amount of hangers and clothing hanging from it. It appears that when it broke, then, right above it was the kitchen with a gas stove above and we’re believing that was most likely the ignition source.”

McNees said this type of explosion and fire is very unusual. “It must have been a fairly low explosive range, just from the area it happened in and the house, it appears it concentrated very quickly,” he says. “It had the fairly immediate explosion as opposed to the ones that fill the entire house and then it blows it totally apart. A very sad situation.”

The house was both a residence and a business from which was operated Denise’s Taxi Service. Both of the victims were residents of the home. When firefighters arrived, the temperature was around one-degree above zero. By the time they left around 3:20 A.M., the temp was down to 11-below.