You are here: Home / News / Senator Ernst stands by call for U.S. to send arms to Ukraine 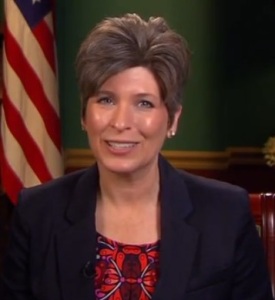 U.S. Senator Joni Ernst says she is holding firm in her belief the U.S. should supply defensive weapons to the Ukraine to fight against the Russian incursion into their country after meeting with several of the key players at a security conference in Munich, Germany last week.

The Republican from Red Oak, says the German Chancellor believes they should continue negotiating with the Russians and that giving weapons to the Ukrainians wouldn’t do any good. “I found that very disheartening, because here is a people who have proven that they are willing to stand up, fight for their country. They are putting their own lives on the line,” Ernst says. “We are not talking about sending German troops in, we’re not talking about sending American troops, we are providing the Ukrainians the ability to defend their own sovereign country, which Russia has invaded.”

Ernst says Secretary of State John Kerry told her the Germans are “war weary.” Ernst, a military veteran, says she asked German officials how far they are willing to let the Russians go. “What are their parameters? We’ve already lost 5,300 lives,” Ernst says. “Because they themselves talk about ‘well we have to have parameters, we need to give the negotiations a chance,’ but the Russians keep inching forward, they keep moving on to different downs and villages. They are not stopping.”

Ernst went on the trip as part of the Senate Armed Services Committee, and says committee chair, Senator John McCain, gave several examples of what happens when you don’t take action against an aggressive country. Ernst says the Germans need to set parameters of when they will act. “It is 10,000 Ukrainian lives lost, is it 15,000, is it 20,000? When do they say ‘enough Russian brutality, enough of the Russian invasion of the Ukraine.’ Is it when the Russians have overtaken up the entire country of Ukraine and pressed up against NATO borders. When do we decide it’s time to allow a country to defend itself?.” Ernst asks.

Ernst was asked what she would do if giving the weapons to the Ukraine does not stop the Russian advance. She says it would be a tough decision to send in U.S. military advisors. “What I would like to see of course, is if those weapons don’t stop the Russians, I think at some point we would need to go back to the NATO Secretary General and really encourage him to get others involved,” Ernst says. “Because again, this is happening in their back yard.”

Ernst says the Ukraine needs help in defending itself from Russia or they may not be the only country facing invasion. “If Russia is progressing through Ukraine, if they would be able to take Ukraine and hold Ukraine without intervention from the European nations, then what country is next? Is it Moldavia, is it any other number of countries that Russia sees as weak and vulnerable?,” Ernst says.

Ernst reiterated that the U.S. would not be sending troops to Ukraine, just weapons to help them defend themselves. She made her comments in a conference call with reporters.