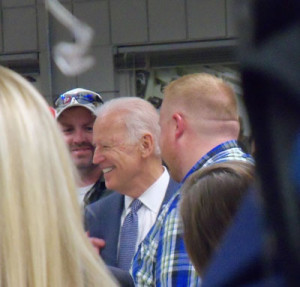 Vice President Biden talks with participants after an event at DMACC.

Vice President Joe Biden says his decision about whether to run for president in 2016 will come several months from now.

“That’s a family, personal decision that I’m going to make sometime at the end of the summer,” Biden told reporters during a trip to Iowa yesterday.

Biden delivered a speech about economic policy at Drake University yesterday, criticizing Republican proposals and urging all Democrats to “stand up” and defend the Obama Administration’s record on economic issues in 2016. He visited Des Moines Area Community College late yesterday afternoon to talk with students and a few business leaders about the importance of job training programs. At both stops he touted the president’s proposal to have the federal government provide two years of free community college courses to “responsible” students.

“This is about convincing the public and, in turn, some of our Republican friends that what we’re proposing in the budget is a continuation of the stuff that works,” Biden said. “It actually works.”

Biden told reporters he was not here in Iowa to start organizing a campaign for 2016, but Biden did admit he was reconnecting with a group of “old friends” who had supported his previous presidential bids.