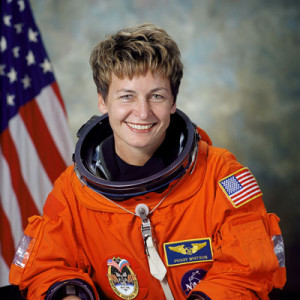 It’s usually impolite to discuss a woman’s age, but astronaut and Iowa native Peggy Whitson may set another space record next year and the question had to be asked.

Whitson turned 55 last week and when she blasts off for the International Space Station in December of next year, she’ll be 56 and she’ll celebrate her 57th birthday in orbit.

It’s believed that will make her the oldest woman, American, Russian or otherwise, to go into space. Is that right?

“I don’t know,” Whitson says, laughing. “I haven’t checked that out, but yeah, probably.” Astronaut John Glenn took his final spaceflight aboard the shuttle Discovery at age 77, that’s 20 years older than Whitson will be when her next mission ends.

Does she intend to continue signing on for more missions? “Well, you know, if my body can hold out, I’d be happy to keep going,” she says. The Beaconsfield native likes to keep in good shape, and lists her hobbies as: weightlifting, biking, basketball and water skiing. If she wants to keep logging more time in orbit, she knows she needs to stay fit.

Whitson has already spent 377 days in space during her previous two missions, longer than any other woman. When she gets home in March of 2017, the tally should be well over 500 days.