You are here: Home / News / Bill increasing the gas tax eligible for a House vote this week 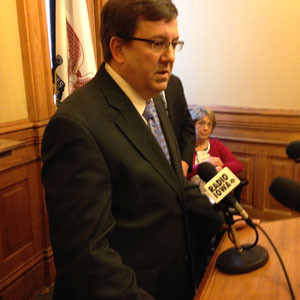 It appears a bill that would raise the state gas tax by a dime a gallon in on the fast track at the statehouse.

“The House is ready to have the bill come to the floor and have the debate,” according to House Speaker Kraig Paulsen, a Republican from Hiawatha. The bill is eligible for debate in the Iowa House on Tuesday.

Last Thursday Paulsen used his authority to replace two members on a key House Committee who opposed the bill. His moves ensured the bill passed on a 13-to-12 vote, but they also heightened the ire of the bill’s opponents. Drew Klein, the Iowa director of Americans for Prosperity, accuses Paulsen of favoring road builders over Iowans in general. “Leadership is clearly more interested in appeasing special interest groups that have been funding the movement than in looking for ways to shield the taxpayer,” he said.

A Des Moines Register “Iowa Poll” released this weekend found that while 61 percent of Iowans consider the deteriorating condition of Iowa’s roads and bridges to be an issue lawmakers should address, Iowans are evenly divided over idea of raising the state gas tax. The poll found 48 percent support the move and 50 percent oppose it.

Senate Republican Leader Bill Dix of Shell Rock has been among those who opposed the idea of raising the state gas tax in the past, but he suggests a majority of Republicans and Democrats in the legislature now agree it’s the best means to plug a shortfall in the state fund that finances transportation projects. “We need to find additional resources to get it into the road funding, to solve those long-term problems, and I’m prepared to cast a vote in favor of it,” Dix says.

For the past four years the Iowa Farm Bureau have been lobbying for a gas tax increase, citing the closure of roads and bridges that create long detours for farmers and rural residents. Over 200 Farm Bureau members were at the statehouse last week to lobby legislators on the issue. And earlier this month, Governor Branstad said the “timing is right” to pass a gas tax increase this year.