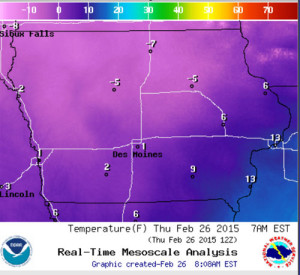 Low temperatures combined with the wind will drop wind chills down in the state.

The snow is over, for now, and Iowans are facing several days of bitter cold. A Wind Chill Advisory is posted this morning for northwest Iowa with wind chills approaching 30-below zero. Meteorologist Jim Lee, at the National Weather Service, says the deepest snow from Wednesday’s storm ended up falling in northeast Iowa.

“Towards Waterloo and Independence, Oelwein, in that area, a lot of areas received between five-and-a-half and 7 inches,” Lee says. “They definitely got the most of anywhere in the state but really across the whole northern part, there were moderate to heavy accumulations.” The original forecast called for 9 to 10 inches of snow and Lee explains the discrepancy.

“It turned out to be a little warmer than we thought and the snow didn’t begin until a little bit later so we didn’t get quite the fluffy snow we were expecting,” Lee says. “The overall precipitation amounts were pretty similar to what we forecast but when the snowflakes are smaller and grainier, it doesn’t pile up as deep on the ground.”

The main concern over the next few days will be the very frigid weather. “From now until Saturday morning, it’s going to be quite cold,” Lee says. “We should see some near-record level cold Thursday night into Friday morning, dangerous wind chills at times, definitely not a good time to be outside if you can help it. Anyone taking to the roads needs to make sure they have plenty of warm clothing and an emergency phone with them.”

The forecast calls for the possibility of more snow late Saturday into Sunday and again next week, Monday night into Tuesday.