You are here: Home / Human Interest / Newton sends out thousands of postcards to encourage city pride 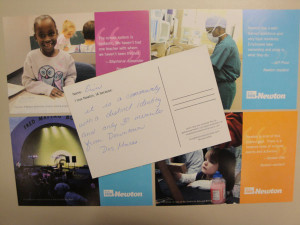 In about a month, thousands of random Iowans will be receiving postcards from Newton residents. The postcards are being filled out by Newton residents who are telling what they love about the city. Natalie Umsted, Newton’s management analyst, says this is part of a larger Neighborhood Postcard Project.

“This is a project that other cities have done across the country and across the world when they want to express a positive feeling about their neighborhood,” Umsted says. “We have 10,000 postcards ordered and we’re going to ask community members to fill out those postcards with things that they love about Newton.” 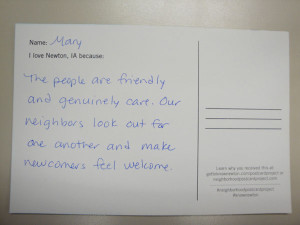 San Francisco and Youngstown, Ohio, are U.S. cities that have done this recently. Now through April 17th, Newton residents can fill out a postcard at the information desk of the city library. When most of them have been completed, they’ll be sent to random addresses across Iowa.

The so-called “Newton Postcard Project” is one element of the “Get To Know Newton” branding campaign the city launched last year. “The whole concept is there’s tons to discover about Newton and there’s always more to learn,” she says. “Whether you’re a lifelong resident, a new resident, an out-of-towner or a visitor, we want to encourage people to get to know Newton and all of the great amenities the community has.”

The inaugural year of the campaign included the launch of a “Get To Know Newton” website and a Facebook page. There were also a number of community events, like last spring’s “Get To Know Newton” NASCAR Nationwide Race at the Iowa Speedway and last fall’s Newton Iowa vs Newton Kansas Challenge.