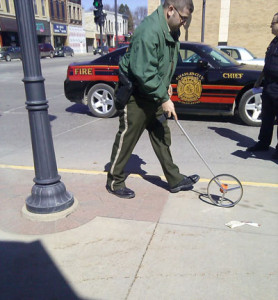 “The light turned green for Mr. Whipple and also the walk light turned at the same time for the pedestrian to walk. (Whipple) turned left…and struck the lady the crosswalk,” Shirley said. The pedestrian, 85-year-old Gladys Kellogg, was last reported in fair condition at a hospital in Rochester, Minnesota.

There were two witnesses to the incident and Whipple told investigators he simply did not see Kellogg crossing the street. No charges have been filed, but the accident remains under investigation. “We’re looking to make sure if anyone has surveillance videos that were in the area,” Shirley said. “Everything that we’re looking at so far (indicates it was) 100-percent pure accident. We don’t see anything reckless at this point.” Whipple was not on his way to a fire emergency at the time of the accident, according to Shirley.