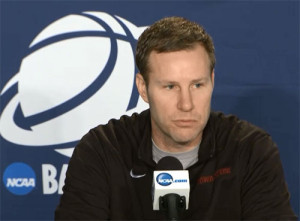 The third-seeded Iowa State Cyclones were upset in their opening round NCAA Tournament game 60-59 by 14th seed UAB in Louisville, Kentucky.

The Cyclones trailed by 3 at the half after building a double-digit lead early, and then found themselves trailing by three with under one minute to play and shooting for the tie. Monte Morris missed an open look for the 3 pointer to tie the game with three seconds to go, and it was tipped in with .04 on the clock.

Cyclone coach Fred Hoiberg talked about the loss. “Congrats to UAB, congrats to Jarod, they deserved that one. They played well, they played hard. I think the difference was the glass, they out rebounded us 52 to 37, they just kind of had their way on the offensive glass down there,” Hoiberg says. Hoiberg on being knocked out in the first round. “This is tough, this as tough a loss as I have ever been a part of,” Hoiberg says, “with what we had going I thought we had the momentum going into this tournament. And then to come out there not play very well.”

The Cyclones were coming in on a 5-game win streak where they came from double-digit deficits to win, including three games to take the Big 12 Tournament championship. “You know it was an emotional three days in Kansas City and then you bounce and you play the first game basically of the tournament on Thursday. I’m not going to make any excuses, I mean you’ve got to come out and play 40 minutes,” Hoiberg says. “I though our turnovers in the first half was the way we let them get back into the game after getting up double digits. Hell, I don’t know, maybe we should have let them get up double digits, that’s kind of how we play our best.” ISU had nine turnovers in the first half.

Hoiberg says they were well aware of the need to box out UAB on the boards. He says that was their big emphasis coming into the game knowing how UAB has out rebounded their opponents the last couple of months. “We just weren’t putting bodies on guys, that was the bottome line, they were just running in there and we turned and looked and they went and got the ball. And you can’t do that against an athletic team like UAB,” according to Hoiberg. 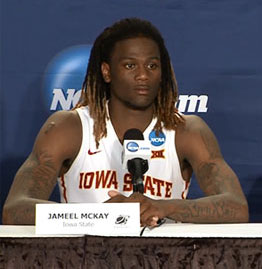 Junior Jameel McKay says there was some battling going on for rebounds. “It was like a war under there,” McKay says, “we knew they were athletic, but we also played some bigger teams this year and we knew that it was going to be a war all night and we were going to have to box out. Unfortunately they played hard and wanted the ball more than us throughout the night.”

With the many late-game runs they’ve made in the last few weeks, McKay says they felt they would be able to do it again. “Yeah, we anticipated we would start to make a run…throughout the day the shots weren’t falling like we thought they would. We are such a good team offensive team and we have such great players, we expected them to start falling. And we just thought our effort would start to go up and we would just start getting stops and with us starting to get stops, we thought we would make a run,” McKay says.

Iowa State finishes the season with a 25-9 record.