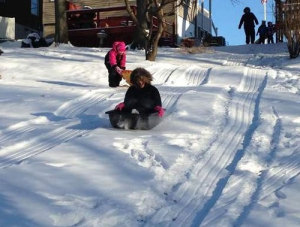 A bill that supporters say will provide some liability protection to cities that allow sledding on city-owned properties — like parks and golf courses — is on its way to Governor Branstad’s desk. The bill cleared the Iowa House last week and senators passed it Monday afternoon.

Senator Rob Hogg, a Democrat from Cedar Rapids, supported the bill, but warned sledding is a risky activity.

“Just a little caution to the people of Iowa…everything we do in the world is not fun and games,” Hogg said. “There are people who suffer life-debilitating injuries.”

Current Iowa law provides cities limited liability protection when someone on city-owned property is injured while engaging in a list of sporting activities, but sledding is not on the list. The bill would take out all the references to specific activities, like bicycling and canoeing. Instead, the phrase “recreational activities” would be inserted in the state law that offers some liability protection to cities, counties, and even school districts that allow recreational exploits on government-owned property. Hogg, who is the only attorney in the senate, says the proposal strikes a good balance, because someone could still sue if there was gross negligence.

“So it’s a good bill, I’m proud to support it, but in the words of Hill Street Blues: ‘Let’s be careful out there,'” Hogg said.

“Hill Street Blues” was a groundbreaking police drama that aired on NBC during the 1980s. A sergeant who was a central character uttered the phrase: “Let’s be careful out there,” as he dismissed his squad to work on the day’s cases.

Earlier this year the city counil in Dubuque passed an ordinance that banned sledding on most city property.