You are here: Home / News / Governor Branstad, in past 50 months, has sent two ‘pocket reply’ emails 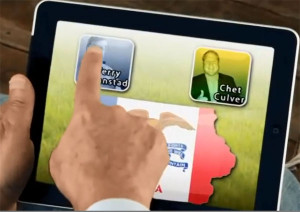 A campaign commercial shows Governor Branstad using an app on an iPad.

Governor Terry Branstad cast himself as a techno-savvy politician in 2010 with a campaign ad that featured Branstad touching various icons on the screen of an iPad.

“Want a brighter future? We’ve got an app for that,” the narrator of the ad says at the conclusion of the commercial.

During a deposition taken in November for a lawsuit alleging the governor discriminated against a gay state employee, Branstad testified that he does not use email or send texts, then Branstad later admitted he owns a Blackberry Bold, although he wasn’t sure whether it could be classified as a “smart” phone.

The governor uses his personal Blackberry to read a daily summary of media stories compiled by his staff. Branstad can access the list of news headlines by tapping the “Messenger” icon on the screen. Branstad spokesman Jimmy Centers sends the lists to Branstad’s Blackberry via email.

During the deposition in November, Branstad said he was advised by his legal counsel not to send or receive email while he served as governor. The governor’s lawyer warned Branstad might be sent a “derogatory or inflammatory” email and the governor said he doesn’t want something someone else wrote attributed to him.

In the roughly 50 months that he’s been governor, Centers said Branstad has had two “pocket reply” episodes with his Blackberry. One email was blank. The other was sent to a non-existent email address.

“At Des Moines University, he did use email, but as governor he chose not to use email,” Centers said. “He prefers to meet with Iowans in person.”

The use of private email has become a political issue after the revelation that Hillary Clinton used a private email account and her own email server while she was U.S. secretary of state. Some Democrats in the Iowa Senate are questioning the explanation about Branstad’s email use and may seek more information.