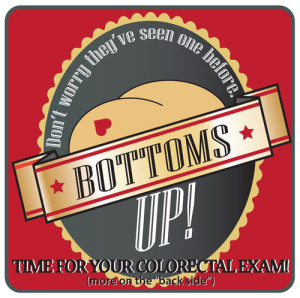 The Iowa Department of Public Health (IDPH) is partnering with beverage distributors for the second year in a row to help get drink coasters promoting colorectal cancer screenings into bars and restaurants.

IDPH’s Jeanna Jones says the campaign began as a light-hearted way to bring up an issue that some people find difficult to discuss.

“We use it as a way to reach out to individuals who might be kind of in a captive audience in a bar or restaurant where it was a relaxed environment that would get people talking about screening,” Jones says. “We originally created two different designs a trivia question and included some information to reduce your risks and screening options.” One of the coasters says, “Bottoms up, it’s time for your colorectal exam.” 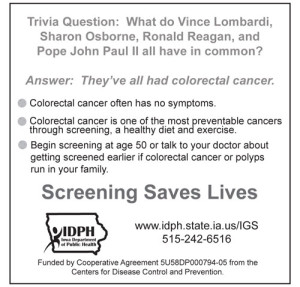 Information on the back of the coasters.

Jones says they hope this approach will help people start the conversation. “Because we know that colorectal cancer is kind of one of those subjects or a disease that people really don’t want to talk about. We’re hoping it will kind of give them enough information that if their physician hasn’t talked to them that they might ask their physician ‘do I need to get screened?’,” Jones says.

She says having the coasters in bars also puts part the focus on the male population, which is an audience that is sometimes hard to reach. “And we figured maybe those farmers who are coming in from the field and going into kind of a community tavern, and would maybe having a beer, would be a good audience,” Jones says. The campaign started with Doll Distributing in Des Moines — which got the coasters into 300 bars and restaurants last year. And this year they added Fahr Beverage in Waterloo. 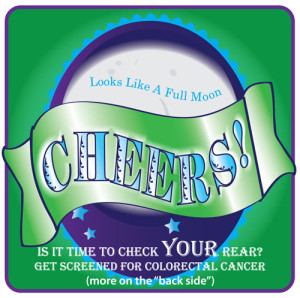 These type coasters will be showing up in bars and restaurants in eastern Iowa.

Jones says getting the conversation going about colorectal cancer is especially important. “Colorectal cancer is the second leading cause of cancer deaths in Iowa and the nation. And it is one of the most preventable cancers,” Jones explains. She says Iowa has the fifth highest percentage of late-stage colorectal cancer diagnoses, and the late stage diagnoses makes the cancer more difficult to treat. The cancer is 90 percent treatable if it is caught early.

Jones says they hope once the conversation gets started in the restaurants and bars, it will get people to talk with family members about the issue too. “Because if people have a family history or precancerous polyps, then we want people to know that, because we want them to begin screening earlier,” Jones says. To learn more about the Iowa Get Screened Program, visit:  www.idph.state.ia.us/IGS.